The Francigena Road crossed Collecchio, called “Colliculum” in medieval times. This belonged to the bishops of Parma. The Church of Saint Prospero was built in the XI century and largely remodeled in 1200, and it still has the cotto majolica decorations in the central apse and the original capitals in the interior space, featuring zoomorphic figures and dating from the XI-XIII century. In the left nave, a bass relief in white marble depicting the Baptism of Christ is preserved, a work by a master from Campione from the XII century. A nice place to visit, the Nevicati Villa from the 1800s is surrounded by the park by the same name in which centuries old trees can be found.
In the surroundings of Collecchio, just beyond the urban area, Strada Conventino, the road bending on the left, allows to enter the Park of the Woods of Carrega. An ancient hunting reserve of the Farnese and Borbone nobles, it features interesting historical buildings, a number of lakes and important botanical stations. Today it is a Regional Park equipped for visitors and open to the public for visits and trail excursions. 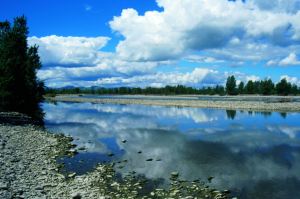 It extends on a surface of 2600 hectares and stretches for about 20 kilometers along the course of the River Taro in the area enclosed between Fornovo and Noceto. In this stretch of the river, the natural landscape is varied and rich with plants and rare protected species, like orchids and Tyrrhenian Cornflower, red and riparian willow, willow bushes, willow trees like the white species and the variety used for baskets.
The most elevated area is covered with poplar, willow and alder woods, and by shrubbery like dogwood, hazel and hawthorn.
The fauna that populates the park is truly surprising, starting with the over 250 species of birds. There is an extreme variety of fish, not to mention a great variety of mammals and rodents such as roe dear, wild boar, foxes, badgers, hares weasels, and polecats. Nutrias, the large rodents originally from South America that escaped Italian farming and found an ideal habitat here, can be seen as well.

FLUVIAL PARK OF THE TARO RIVER – Regional Park
Extension: 3.122 hectares
Elevation: from 56 to 185 meters above sea level
Management: Consortium of public institutions set up between the Province of Parma and the Municipalities of Collecchio, Fornovo di Taro, Medesano, Noceto and Parma.
Headquarters: Corte di Giarola – Strada Giarola 11 – 43044 Collecchio (PR) – IT
Free entry. From sunrise to sunset.
For guided tours of the park, contact the number ++ 39-0521-802688.
Best time to visit: all year round.
Accessibility: From Parma, SS 62 of the Cisa in a southerly direction to Collecchio and Fornovo, 15 Km from Parma; Extra-urban Tep line Parma-Collecchio-Fornovo; Urban Tep line n. 6 every hour.
The signposted entrance to the park is in the Giarola area.
Accessible on foot or on horseback.

Established by the Emilia Romagna Region in 1982, the Park extends on a surface of 1270 hectares of land. It once was a hunting reserve for the Farnese and later the Borboni nobles, and belonged to the patrimony of the Court up to the times of Maria Luigia, who preferred to spend time there during summer. After the unification of Italy, it became a State Property, and in 1881 was donated by the Savoy to the Carrega of Lucedio princes.  They progressively sold it to the Region following adverse circumstances. The terrain slopes down in a series of fluvial terraces that were created by the erosion of small waterways that formed ravines in the highest part. A cool humid microclimate has favored the growth of a spontaneous vegetation made mostly of oaks and chestnut trees, in addition to spruce and beech woods.

There are also exotic woods like cedars from Lebanon and Overseas species like Canadian Spruce or North American Sequoias.  Maria Luigia of Habsbug gave orders to bring these to Parma and to plant them in the central area next to the residence of the Dukes.

Due to the great presence of waterways and lakes, the fauna is rich with numerous species of reptiles and amphibians in addition to a diversified presence of birds of which we can count 65 species. A noteworthy feature of the Park is a Rescue Center for Predatory Birds established by Lipu.

In addition to birds, the park is populated with mammals of large and small size like weasels, badgers, stone martens, squirrels, foxes, wild boar and roe deer.

In the center of the park the Casino of the Woods, that today hosts the headquarters of the Park Institution, rises as a splendid building in Neoclassic style. Designed by French architect Ennemond-Alexandre Petitot in 1789, it was later widened by order of Maria Luigia who also ordered the construction of nearby Villa del Ferlaro between 1828 and 1831 (today privately owned).

PARCO DEI BOSCHI DI CARREGA – Regional Park
Surface area: 1,270 hectares
Height: from 110 to 470 meters above sea level
Management: Consortium of public institutions set up between the Province of Parma and the Municipalities of Collecchio, Sala Baganza, Fornovo di Taro, Felino and Parma.
Location: Park Center, Strada Olma, 19 – Talignano – 43038 Sala Baganza (PR) – I
Tel. ++ 39-0521-833440
Fax. ++ 39-0521-836369
Free entry. From sunrise to sunset.
For guided tours of the park, contact the number ++ 39-0521-833440.
Best time to visit: all year round.
Accessibility: From Parma, SS 62 of the Cisa in South-West direction up to Collecchio and from here, by the Conventino road heading South, 15 Km from Parma. Free parking at the park’s limits. From Parma, SS 62 of the Cisa in south-west direction up to Stradella; SP for Sala Baganza in a southerly direction and from here, by road Casino dei Boschi in a westerly direction, 15 Km from Parma; Extra-urban Tep line Parma-Sala Baganza; Urban Tep line n. 6 every hour, approach path on foot (2 km).
Accessible on foot or on horseback.